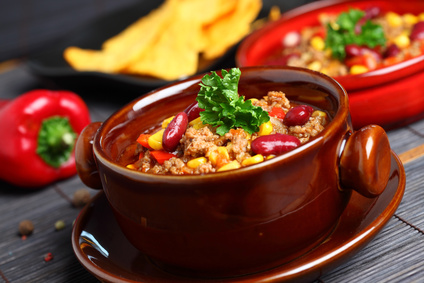 One of the best-known specialties of the Southwest of the USA is undoubtedly the chili con carne, which has also conquered Europe for several years. The dish has already found its way into many kitchens in Europe, but the original chili con carne is very difficult to find.

The original recipe can now be discovered in many variations, because every chef allows his own ideas and taste preferences to flow into it. If a chili con carne is to be cooked originally, only a few ingredients are required, a large part of which can be found in almost every household.

Chili peppers and beef are the basic ingredients for a Chili con Carne original that should be at the top of the shopping list. The meat can either be cut into fine cubes or roughly turned by the mincer. Fillet of beef is often added as a flavor carrier. Cumin, Mexican oregano, garlic and onions are used as spices. Chili peppers of the New Mexico variety are used to ensure that the original chili con carne gets its typical spiciness. A slightly milder variety is the Anaheim Peppers chilli pepper, but it still has a spiciness level of around 500 to 2,500 Scoville units. There are even some strains that range from 4,500 to 5,000 Scoville.

Four chili peppers are used per pound of beef to make an original Texas chili con carne. However, if the chilli is to be prepared in a milder variant, only one to three pods should be used with the same amount of meat. Often other cultivars such as anchos, chiles de arbol or pasillas are mixed with the chili peppers or can be supplemented with them.

The Chili con Carne original is cooked on a small flame for several hours, which gives it its typical creamy sauce. The perfect aroma unfolds when the chilli is cooked the day before and chilled overnight. The next day it is warmed up again and can then develop its full taste. Due to the long cooking time, only meat with a lot of connective tissue should be selected, such as Hesse, which is used to describe the lower leg of beef, or breast. Since chili con carne has to be cooked for a long time, pieces of meat such as back or fillet are not suitable because they do not have a lot of connective tissue and would disintegrate when cooked.

Of course, an original chili con carne recipe should not be missing at this point. The ingredients are sufficient for four people.

First, the washed and dried meat is cut into cubes about two centimeters in size, removing large tendons and pieces of fat. The peeled onion is diced and the slit, pitted and washed chilli peppers cut into fine rings.

In a heavy, wide saucepan, the beef and diced onions are gradually added to the heated oil and everything is fried over medium heat, but the whole thing should not get too dark. The peeled garlic is now pressed and the chili rings are stirred in. Now pour on the broth and season with the rest of the ingredients, except for the corn flour. The chili con carne is simmered on a very low heat for about an hour and a half, with several stirring times in between. If too much is overcooked, water can be added. Before the original chili con carne is served, the corn flour is stirred under it so that it is bound. Boil the whole thing again briefly and then season to taste.