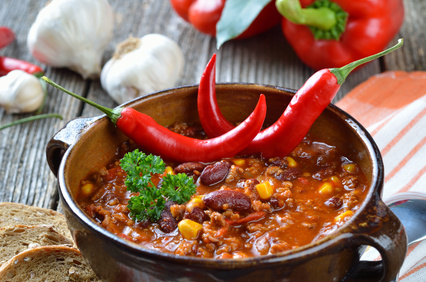 All fans of Chili con Carne agree on one point: the dish has to be nice and hot. However, it depends on your own taste which type of meat and other ingredients the cook decides on and which are essential.

According to the old traditions, minced meat belongs in a chili con carne and so that the dish gets its creamy consistency, it should be fried until it is crumbly. In the Chilli state of Texas, beef is mainly used because it is available at all times. Alternatively, game and pork can also be used for the dish. The different types of meat you choose mean that you get a completely different chili con carne every time.

In the US state of Texas, there are no beans in a Chili con Carne , because then it would no longer be a matter of the state court. On the other hand, it looks completely different in other areas, where the beans must not be missing in the dish to be able to speak of a chili con carne and where it is not just an ordinary meat stew with various ingredients. Pinto beans or kidney beans are preferred with the chili con carne.

When meat was still very expensive, the pulses were used at this time and could therefore replace meat. They are very rich in protein and at the same time offer a satiating effect and are therefore the ideal substitute for meat. This means that the chilli can even be prepared vegetarian. This means that fans of meatless preparation do not have to do without the fiery chilli. However, the dish is no longer called Chili con Carne, but Chili sin Carne. Plenty of vegetables and beans are added to the chilli and, depending on the chef's taste, it can also be prepared with soy granules or tofu.

A Chili con Carne has to be really hot, but there are many different types of chilli that also differ in their heat. Particularly when cooking, some varieties can lose their initial sharpness, such as the Habaneros, which are fruity and sharp, but lose their aroma when cooked and are therefore rather unsuitable for this dish. On the other hand, the varieties Pasilla, Ancho and Jalapeno are well suited, because the spiciness is retained even during cooking, so that a really fiery chili con carne can be prepared.

But the spices for seasoning the dish are also important, with which the chili taste can still be properly emphasized. In order to really emphasize the sharp taste, the experts of the fiery stew often use Tex-Mex spices, such as cumin and oregano. Of course, the Mexican oregano, which is related to the European variant, is much stronger in taste.

Since today special attention is paid to health, there are also many different recipes for chili con carne. Nowadays there is an increased health awareness and so the Southwestern Chicken Chili developed especially in the southwest of the USA. More and more often today the so-called chicken chili is preferred, because here pork or beef is replaced and poultry is chosen instead. Likewise, the various ingredients are trimmed to a more digestible, so to speak leaner chili.

A very special variation of the Chili con Carne has established itself in the state of Ohio in the city of Cincinnati. Here the chilli is served on spaghetti and a little grated cheese is added on top, which is very spicy. Raw chopped onions can be added to suit the cook's own taste. With the Chili Cincinnati Style, every chili chef has his own recipe, which remains a secret, but many use cinnamon, which may sound surprising, but gives the chili con carne its very own note.